BY TIJS BESIEUX. Hong Kong’s revolt was not unexpected. In this blog I’ll explain why the Hong Kong revolt is long overdue, and why the government’s strategy to wait out protesters won’t lead to sustainable stability.

Written bij Tijs Besieux, the managing director of the Leuven Center for Collaborative Management. He studies leadership, negotiation, and conflict resolution throughout. Tijs is passionate about bridging theory and practice, he tweets via @TijsBesieux.

On the left, a €160.000 Lamborghini Gallardo sports car is tucked away in a tight parking spot. On the right a young woman is bound to transport a cylinder, traditionally used to fuel the gas furnace at home, on her bicycle. Both worlds are separated by a fence which is just ajar.

I came across this scene during a research stay at the Lingnan University back in 2013. My scholarly interest in leadership, combined with the inspiring society that Hong Kong is, led to the writing of an article that seems to be particularly relevant nowadays.

The Sky is the Limit

Since the United Kingdom ‘handed over’ its strategic gateway to Eurasian trade in 1997, the Hong Kong economy continued to soar, and is recognized as the officious financial heart of Asia. Being the world’s most liberal capital market, its numerous and colossal skyscrapers seem to be a metaphorical reminder of the region’s big idea: the sky is the limit. Against that backdrop, Hong Kong can boast with key economic indicators that are admirable, especially in an era marked by the Great Recession:

From that perspective, Hong Kong could rightfully claim the title of ‘roaring engine of the East’.

Every Coin has Two Sides

However, below the surface of these impressive numbers, one finds a different reality, in which a considerable wealth gap illustrates the brittleness of the Hong Kong society. In fact, 1.4 million people live under the poverty line, being 20% of its more than seven million inhabitants. Further, a doubling of the home prices since 2009 impedes those who pursue social upward mobility. As an example, one pays an average monthly rent of €1.685 for a single bedroom apartment. Yes, a single bedroom apartment. Leuven doesn’t seem so bad anymore, does it?

Moreover, the income inequality surpassed a certain benchmark for analysts to label it as ‘at risk for social unrest’. Hong Kong’s current Gini index, a widely used measure for income inequality, of 0.5 is well above the 0.4 threshold.

A ‘Special Administrative Region’ to the People’s Republic of China, Hong Kong resides under the strict supervision of Beijing. As such, the Chinese Communist Party exerts a certain power –both formal and informal– over the election process of the Hong Kong Chief Executive, a suitable name for the man or woman in charge of the vibrant international business hub that Hong Kong has become.

The election process is often perceived by the Hong Kong citizens as lacking credibility, pointing out the predicament of China’s ‘one country, two systems’ credo which hampers the case for a truly democratic Hong Kong.

For instance, image that you and a colleague student fill out the same answers on a multiple choice answer. However, you both get different grades, even though the answer sheets look exactly the same. Odds are high –especially when you got the lower grade– that you will perceive the procedure leading to your grade as unfair, and hence take action towards the professor or the ombudsman.

In the particular case of the umbrella revolution, the Hong Kong masses became (and have long been) fed up with the ‘illusion of democracy’, and decided to take action and occupied large parts of the city center. Indeed, they perceive that the current procedures applied in order to elect a new Chief Executive are not just. From that perspective, it becomes obvious that the umbrella revolution cannot simply be folded by waiting out the protesters. The issue is fundamental in nature, and needs to be addressed as such.

The Road Not Taken 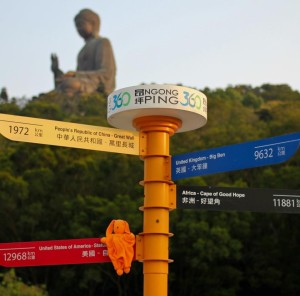 Hong Kong is a crossing road where various religions, economic systems, and cultures have collided for many centuries. This remarkable heritage has brought forward a people that is known for their entrepreneurship, vigor, and a certain joie de vivre. I will remain on the edge of my seat to observe how the Hong Kong people will take on these vast challenges ahead.

Given the recent happenings, Hong Kong now has the unique opportunity to set an example for global prosperity. By negotiating properly, this particular region can inspire our globalizing world in terms of integrating interests from a variety of stakeholders, each representing different domains of an interconnected society. Let’s hope for Hong Kong to take the road not taken.