BY SHEILA PHAM. It’s cost me more than $20,000 to complete two undergraduate degrees and a masters in Australia, which I’ve gradually paid off. To me, this didn’t actually seem too expensive for a good quality education. But after studying at KU Leuven for a semester, my ideas about the cost of a university education have been deeply challenged.

This piece was written by Erasmus student Sheila Pham. She blogs at ‘Elephant Woman‘. She tweets at @birdpham.

There are relatively few students from Australia at KU Leuven. I only met one other compatriot at the start of the academic year, undertaking a masters degree in marketing. “It’s so cheap here! 600 euros is nothing!” she said. A few days later I was surpised by how little it cost to take an Italian class at the CLT (the positive attitude to multilingualism here is one of the things I admire most about here). Clearly, education is prioritised in government spending. What’s curious is that international students been included in this arrangement too. This stands in stark contrast to the situation back home. Australia’s higher education system has become increasingly dependent on exorbitant tuition fees from international students. It’s reassuring that KU Leuven hasn’t taken this path to ‘internationalization’.

As it is, I’m on a scholarship from the European Commission through the Erasmus Mundus program. My three-country postgraduate program is more expensive than other master degrees at KU Leuven, but it’s so much more affordable than an equivalent masters back home. Being awarded such a generous scholarship felt like a fluke given I’m from a wealthy country like Australia; though having said that, I don’t come from a wealthy background myself. In the turbulence after the end of the Vietnam War, my parents fled by boat and resettled in Australia after time in a Malaysian refugee camp. My migrant background might partly explain why I’ve never personally felt ‘owed’ a (free) university education by the government of Australia. Paying some amount for my education, to me, meant sustainability of the system. But studying in Belgium makes me think that I’ve probably fallen into the trap of thinking in an economic rationalistic way, when it’s clear that there are other models out there to support a higher education system.

Europe’s heritage is not just cultural, but also intellectual

Given all this, I’ve been wondering what exactly Europe gets out of awarding Erasmus Mundus scholarships to students like me. After a semester at KU Leuven, I have a few ideas. One of my electives at KU Leuven was a philosophy subject on ethics, one of the most challenging subjects I enrolled in. We explored ideas from the great philosophers of the West, trying to understand attempts throughout history to answer questions like, what is a good life? What is a good society? Another philosophy subject I took was on media ethics, and one of the lessons from that very stimulating course was that the way you perceive the world is heavily influenced by the social worlds you belong to.

I realise now that I’ve probably been asking the wrong questions. I was “not seeing the wood for the trees”, as the saying in English goes. My understanding of the Erasmus Mundus concept was transactional, a somewhat short-sighted view. Somehow I couldn’t help but think of ‘value’ in quantifiable terms. I also wasn’t sure what to make of the idealistic intercultural vision of the Erasmus program which seemed, well, very “European”. I guess I’m a product of where I’m from; in the Anglo-American world there is a greater concern with return on investment or “bang for buck” – whereas Western Europe still seems to cherish the concept of quality when answering “What is a good society?” People here have very different expectations of what they’re entitled. Notwithstanding the social issues in Belgium that need to be resolved, this nuanced focus on quality of life is something I’ve appreciated; and one real way in which this quality is realised is through education. 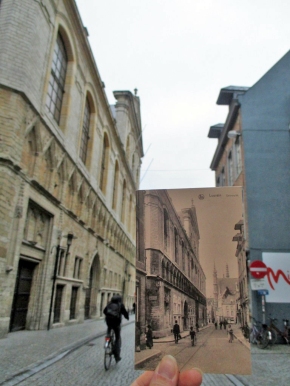 In Australia, figures are regularly published about how much you can expect to earn with the degree you study. This emphasis is partly due to the cost of education, where it feels like a middle-class luxury to pursue non-vocational subjects that don’t lead to obvious careers. In Leuven it’s been refreshing to see the popularity of subjects like philosophy and theology, which are becoming marginalized back home – though maybe that’s the same here too, to a lesser extent. Australia’s ultra-pragamatic attitude doesn’t always promote the real value of education, particularly the value of an education in the humanities. This is of course an old and frustrating debate and nothing I’m saying is new, but it’s been good to get some new thoughts on this issue. All in all it’s actually not that easy to compare the two countries when the approaches are so different. Although life is far from perfect, there’s a general sense of momentum in Australia, a future-oriented perspective, which I don’t detect to the same degree here in Europe. This probably relates to having more traditions to maintain here, a stronger focus on solidarity, a certain kind of ethos. The atmosphere in Leuven is completely different.

So I’m starting to see that the ‘value’ of the Erasmus Mundus Master of Bioethics needn’t be discussed in monetary terms. The ripple effects will continue for years. Today one of my professors said that one of the best outcomes of the program has been the way students from developing countries have gone back home and introduced bioethics into university curricula where none had existed previously. Alumni from the same regions have been collaborating too. These are small steps but they’re critical and programs like this build up social capital in an increasingly globalised world. So it may be hard to express such value beyond subjective terms, but I will personally return to Australia with a clearer understanding of Europe’s intellectual heritage, and a much broader perspective which will inform my future life and contributions to society. Ultimately, that’s the true value of education, right?