BY PIETER THYSSEN. Imagine a world without traffic jams or airport security lines. A world where you could have a morning cup of (Arabica) coffee in Paris, an afternoon walk in the Brazilian rainforest, and a dinner on top of an Egyptian pyramid. Now wouldn’t that be cool? Well, all you’d need is a teleportation device such that, at the flick of a switch, you could beam yourself across space to whatever destination you’d like, without physically crossing the space in between.

Written by researcher  Pieter Thyssen, who is fascinated by the philosophy of physics. This post first appeared on his own blog, The Life of Psi, and was based on his three minute video presentation on the same subject.

The typical beam-me-up-Scotty-kind of teleportation works pretty much like a cross between a fax machine and a 3D printer. Your entire body would first be scanned in some futuristic MRI device, and the details about your atomic configuration would then be send to a distant location, where it would be used to construct an exact replica of yourself.

No more traffic jams or airport security lines. In the future, we might go to a teleport terminal where we would step into a transporter to beam ourselves to whatever destination we’d like. Source: Zeilinger, A. “Quantum Teleportation.” Scientific American (April 2000): 50-59.

If you don’t want to arrive at your destination with a leg sticking out of your head or your organs inside-out (remember the inside-out baboon in The Fly?), you would of course want to scan yourself accurately enough. But that is where the problem lies. You see, there’s this little thing in physics, called the Heisenberg uncertainty principle, which says that the more accurately you try to scan something, the more you have to disturb it, and the more you will change it, making it fundamentally impossible to extract the information of an object without destroying it entirely.

So for years, scientists believed teleportation was just a science fiction pipe dream. But in 1993, a bunch of smart-ass physicists found a way to circumvent Heisenberg’s principle by using something called entanglement.

Entanglement is one of those quirky concepts from quantum mechanics which even Einstein called “spooky”. If you entangle two particles, they will share a magical but invisible bond, such that if one particle gets affected, the other one will feel it too, no matter how far apart they are. “It’s like two people playing dice, each in a different galaxy, and always getting the same result, even though the result is determined by pure chance,” said Rupert Ursin. (If you’d like to know more about this mysterious quantum link, don’t hesitate to read my previous post on Bertlmann’s Socks and the Nature of Reality.)

Artistic depiction of two entangled atoms. There is no visible connection: no forces, no pulleys, no telephone wires, no nothing. And yet, somehow the atoms seem to communicate with one another, allowing scientists to teleport information from one place to another.

The key to teleportation is to use this entangled pair as a communication channel to transmit the information you want to teleport from one place to another. The exact teleportation protocol is a little tricky, so bear with me for a moment. Let’s imagine you wanted to teleport a particle (let’s call it A) from the Earth to the Moon. First of all, you would need to generate a pair of entangled particles B and C. One of those (B), you would keep here on Earth, while the other one (C) would be send to the Moon.

Now, the aim of quantum teleportation is to change the identity of the particle C on the Moon and to turn it into an exact replica of A. In order to do this, we somehow need to extract all the information about A, and teleport that information to the Moon, so that C can use it as a kind of blueprint to turn itself into A. The problem however is that we cannot simply scan A to extract its information (remember Heisenberg?).

So instead, we entangle A with the other particle B here on Earth. That way, some of A’s information gets shared with B, and since B is entangled with C on the Moon, the information is passed on further to C, enabling C to transform itself into a copy of A. (I’ve added a green box at the bottom of my original post with a more detailed explanation of the quantum teleportation protocol if you’d like more mathematical detail.)

There is a price to pay however: the original particle A will be destroyed in the process as it loses all its information and thus also its identity. (The same also happens to B.) In summary, you would see the original particle A disappear here on Earth, and reappear an instant later on the Moon. Congratulations! You successfully teleported your first particle.

I realize the whole teleportation procedure might sound rather magical, but two years ago, a team of scientists set foot on the Canary Islands, and managed to teleport a particle of light from La Palma to Tenerife over a distance of 143 kilometers! A few months earlier, a group of Chinese scientists performed a similar feat by teleporting a photon over a distance of 97 km across a lake in China. Soon, scientists might be zapping photons via satellites through interstellar space over hundreds (if not thousands) of kilometers. 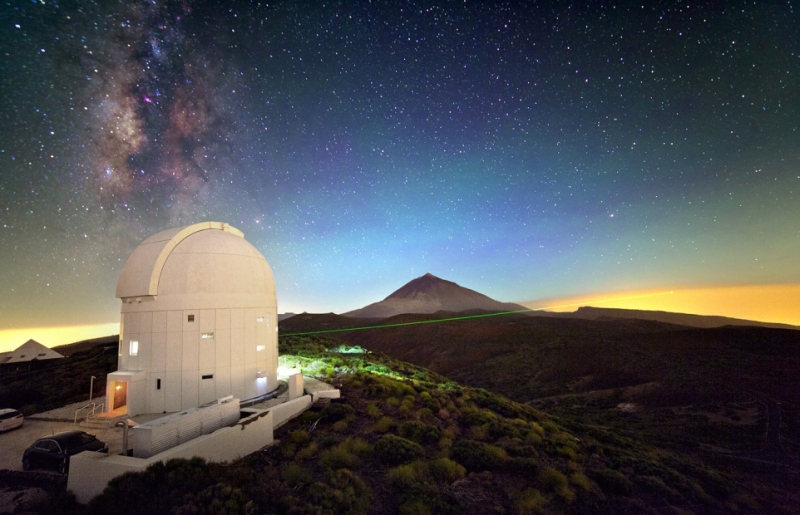 In April 2012, a team of international researchers from Austria, Canada, Germany and Norway, led by the physicist and quantum wizard Anton Zeilinger, managed to teleport a photon from La Palma to Tenerife over a record breaking distance of 143 kilometers.

Admitted, at this point teleportation is still very much restricted to tiny particles. Photons and electrons, in particular, are now routinely being teleported across record smashing distances. But great advances are being made. Physicists recently teleported the properties of one atom to another one. And last year, researchers at the Niels Bohr Institute managed to teleport the information between two gas clouds!

Now I know what you are thinking at this point. If we can already teleport entire gas clouds of atoms, will we ever be able to teleport a human being? Will we, in other words, turn science fiction into science fact?

Unfortunately, we’re not quite there yet. And that’s probably the understatement of the year. All in all, there are at least three problems that should be overcome before we can allow Scotty to beam us up:

1. The practical problem. First of all, our body consists of more than a quadrillion atoms, each of which should get entangled, digitized and teleported. But all that information would fill billions and billions of gigabytes of data, which would take more than 350.000 times the age of the universe to transmit! So basically, teleportation would take forever!

2. The safety problem. Then, there’s the problem that entanglement is a very fragile bond, which can easily break due to the phenomenon of environmental decoherence. Basically, even the slightest disturbance (such as a light ray falling in, or a slight temperature fluctuation) can shatter the entanglement, breaking the communication between the points of departure and arrival. Now, when we are dealing with more than 1028atoms, keeping all the entanglement intact becomes extremely difficult. And if anything would go wrong, you might well lose half your body in transit, or be zapped right inside a mountain.

3. The philosophical problem. Finally, there’s the problem that teleportation does not actually involve the transmission of matter but only the transmission of the information encoded in that matter. To put it bluntly, as the information about you would be sucked out of your body, you would get pulverized to a heap of atoms, and the person walking out at the other end of the pipeline would be nothing more than an exact Doppelganger. It’s as if your soul would have been re-injected into another body and the original you would have “died” in the process. Here’s Sheldon, from the Big Bang Theory, explaining it:

But let’s not despair, because human teleportation is theoretically possible. That is, human teleportation does not violate any of the fundamental laws of nature, and the above mentioned problems are in the end nothing more than technological problems. So who knows who Scotty might be beaming up, say ten generations from now! But for the moment, it’s probably quicker and safer to buy another plane ticket . . .

This post was based on a three minute talk I gave on May 22 during the FameLab Benelux finals at Science Center NEMO in Amsterdam. You can watch my three minute pitch in the video below: