BY JACK MCMARTIN | Every year in February, thousands of scientists, journalists and press officers from around the world converge in one place (this year, deep-frozen Chicago) for the mother of all science conferences: the AAAS General Meeting. I was lucky enough to join in this celebration of science, discovery and nerdom. Here’s what I learned.

Jack McMartin was a science communicator in the KU Leuven newsroom. He tweets @jacksaidthat

The AAAS (aka the American Association for the Advancement of Science, the world’s largest general scientific society and publisher of the journal Science) proclaims two missions for itself: advancing science and serving society. One way it fulfills these missions is by training science stakeholders (read: researchers, journalists, press officers, university leaders, policymakers) in the art of communicating scientific findings clearly, accurately and compellingly to the public (read: non-specialists, the Average Joe, laypeople, your grandmother).

This art has a name: science communication. And the community is thriving. In fact, many top universities around the world now offer graduate programmes and summer schools (There’s one in Flanders!) in science communication. Whole centres, professional organisations and Twitter hashtags are devoted to the craft. Some universities even staff newsrooms and scicomm offices to cover the beat. (Major hat tip, KU Leuven)

Set goals. So you’ve decided to become a science communicator? That’s great! Before joining the conversation, ask yourself: ‘what do I want to get out of this?’ Are you in it for community creation, professional collaboration, advocacy, public outreach, press attention? Once that goal is set, ask yourself ‘who do I want to reach?’ Figure out where those people are, and go there! Your audience may well be on social media; Facebook, Twitter, the blogosphere. Time to learn more about communicating with those channels! But remember: if you have no reason to be on social media, don’t bother!

Be authentic. When communicating to the public about your research (particularly via social media), do not shy away from sharing personal setbacks encountered throughout the course of your research. Be upfront about your weaknesses or the weaknesses of your research. Your credibility relies in large part on your authenticity. Marketeers say Twitter is for self-branding and career advancement. Not so. You want people to see you as a person, not a lab coat or tweed jacket.

Tell a story. Communicate your science as a story. Science is the great mystery story because it drips of the drama of human discovery. And it always has room for sequels. Yes, scientists are trained to keep emotion out of their science, and that is a good thing. But often the most interesting science stories are about the human side of science and scientific discovery. That said, avoid ‘soap opera science’. Integrate the story with the science. Don’t ‘dumb things down’, but do explain things in layman’s terms. Assume that your audience is intelligent, but not yet informed on the particular topic. Use analogies, visuals, anecdotes. Have a sense of suspense (and a sense of humour). A good, basic narrative arch to keep in mind: 1) this is how it was, 2) and then this was discovered, 3) and since then this has been the view of the world.

It’s about them, not you. There’s overlap here, of course – people will always be interested in science, and good science communication will always find an audience. Tell them things they don’t know; take them places they wouldn’t otherwise go. Be accessible, literally and figuratively. Give your audience a way to contact you and respond to them promptly.

Don’t oversell your research results. Hold yourself to the highest level of journalistic integrity. Avoid words like ‘major breakthrough’, ‘new discovery’, ‘paradigm shift’, etc. except when there is absolutely no better way to describe your work. Science is a slow, incremental, one step forward, two steps back enterprise. Be honest about that. Not every newly described protein, gene or star warrants a headline in the New York Times. That said, behind every discovery, however incremental, is a story. Tell it if you think it’s worth hearing.

Find your voice. It takes time, practice and hard work to become a good science communicator, and to build an audience base. Get to know the neighbourhood and reach out to people whose work you look up to. Experiment with science writing, blogging, tweeting. Participate, passively or actively, in science cafés, the Science Slam, Metaforum lunch lectures, a blog. Why not make it this one? 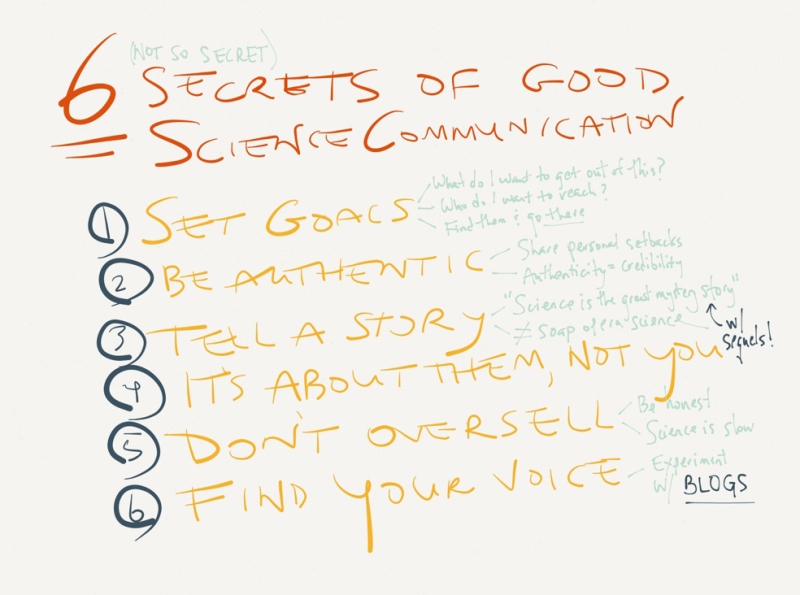