BY BRUNILDA PALI. We are imaginative about many things and find the exercise of imagination easy and pleasant, with the exception of our ideas and images of justice. They seem to be written in stone. But what if instead we used the gift of our imagination when it comes to justice?

Written by Brunilda Pali, a postdoc researcher in the Leuven Institute of Criminology. She researches restorative justice, and has a background in psychology, gender studies, and cultural studies.

Lady Justice is the main image of justice we have. A blindfolded woman with scales and a sword. Blindfolded because she has decided not to see whom she has in front of her. Her scales measure the crime, the pain it causes, and fit it to the punishment. Her sword delivers the punishment, monopolizing its violence. 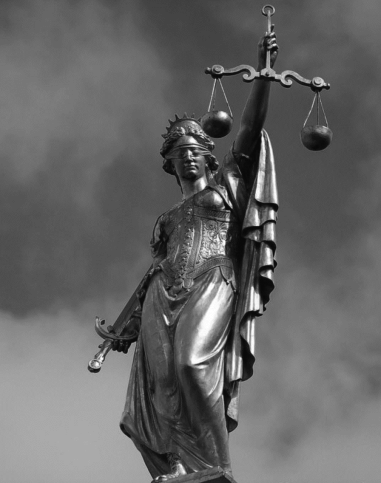 Is Lady Justice a just image? Let us consider the blindfold. If justice was really blindfolded, the ways she claims to be, then why are our prisons filled with blacks, foreigners, and the poorest of the earth? Instead I think she stands blindfolded not to see the injustices imposed in her name, and the meaninglessness of our closed institutions. Being deep down a woman in fact, this lady cannot bear to see!

When claiming to do justice, when trying to do justice, our eyes must be open wide. The men and women in our hands are not abstract but real human beings. They have been babies with a crystal face, playful children, and have grown up women and men among us. They are called Philip, Emilie, Antonio. In 1931, a woman called Margaret Wilson, out of her own initiative, curiosity and concern, writes a book called The Crime Of Punishment. She writes this about her book: This is a woman’s book, and we shall be as shamelessly women as we please. That means we shall not think about Law, or Justice, or Safety, or any other abstraction at a distance from their meaning on the lives of men and women, boys and girls we love.

Removing the accessories of Lady Justice

Lady Justice is especially proud of her scales. We are truly obsessed with the scales. But our obsession is presumptuous. It claims to be able to measure human pain and fit it to the punishment. Well, a very simple tour of crimes and punishments in time and space shows how ridiculous our assumptions are. A crime not recognised today was punished with death penalty yesterday, while the same crime in one country is punished with a fine, in others with death penalty. We search for accuracy and precision but cannot find it.

But it is with the sword that Lady Justice claims to make things right. The Algebra of Suffering writes Anna Messuti in her book Time as Punishment is: minus x minus = more, negative x negative = positive. But do we really believe that in order to get rid of suffering we need additional suffering? The sword of justice claims the monopoly of violence, but it does not take a distance from it, it copies crime to the letter, amplifying the chain of pain. For this reason, the history of punishment is not less cruel than the history of crime.

Restorative Justice goes against the image of Lady Justice in all of its elements: blindfold, scales, and sword.

Restorative Justice goes against the image of Lady Justice in all of its elements: blindfold, scales, and sword. Its eyes and ears are open wide to see and hear the faces and the voices of those who have harmed and those who have been harmed. It does not have the arrogance to think we can measure pain and equate it with punishment. It deals with the irreversibility of human action. What is done cannot be undone. There is no equality of pain. Crime and punishment are not interchangeable. We must move on from this.

Restorative justice tries to create rights from wrongs. It does not copy crime, it keeps it away, says Claudia Mazzucato. One of the mediators that has enabled important encounters between perpetrators of political violence that took place in the 1970s in Italy and their victims, she argues that the strongest argument against violence is the critique of violence. Restorative justice can meet violence, but it does not use it, and therefore it does not legitimize it. Answering evil with evil might seem the most obvious, but is not the best way to establish an equilibrium.

But if we ignore arts and imagination we lack the tools that can help us to understand what we do, why we do it, but most important imagine things being otherwise. I want to illustrate this point with a story. In 1981, the Sardinian artist Maria Lai (who died recently at 93 years old), made in the hometown town Ulassai in Sardinia, a truly unique art of work called Legarsi alla montagna (Tied to the mountain).

She started her work by talking to the people and hearing their stories. Among the stories told to her, one legend caught her imagination: the legend of the blue ribbon. The legend tells of a little girl who was within a cave that fell down but was saved thanks to a blue ribbon she saw in the sky. She held on to ribbon which took her away into the sky. The legend originates from a real event that took place in Ulassai many years ago when a piece of the mountain that lies on top of the town fell down causing a tragedy.

It was this legend and the imagination of the little girl that gave the artist the idea to create her art work. Merchant donated large amounts of blue fabric. And the inhabitants cut the fabric into long, meters and meters of blue ribbons. Some of course, found the task utterly ridiculous and just watched. Once the ribbons were ready, the artist asked the inhabitants to tie the whole town into itself, from house to house. 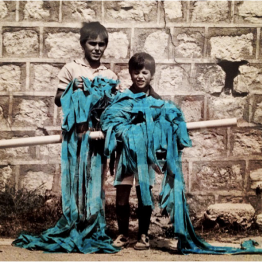 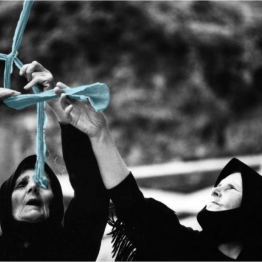 Some people started refusing, saying that they were enemies with their neighbours and would never tie the houses to each other. Working with the resistance, the artist asked them to tie them anyhow, but tie colorful clothes and loafs of bread into the nodes where they was friendship, and put nothing where they was none. As all the houses were being tied to each other by the people, a helicopter flew in and climbers tied the whole village to its mountain, in order to make peace with it.

I am aware this image and its story belong to an arts museum and not into a courtroom (and it would be rather impractical to tie our courtrooms with blue ribbon). But it helps us imagine justice otherwise, hinting towards a vision of a justice that repairs, a justice that is a craft and an art. Perhaps time has come for Lady Justice to become a 93 years old woman. Or perhaps courts must launch public forums, inviting artists, designers, students and others to imagine justice otherwise.